How A Single Mom Became A Leader In Missoula Martial Arts 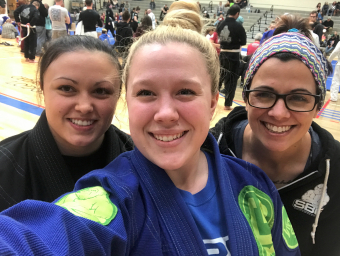 Coach Bekah didn't take martial arts very seriously when she first began her journey, but just look where it took her!

What I found at SBG was something more than self-defense skills, a great workout, or learning a new skill. I pushed myself farther than I could have imagined. More importantly I found my tribe.

That’s what SBG brings to the Missoula martial arts community that is different.

My First Day at SBG

I was a young, single mom when I moved out of my parents house for the first time. My parents, who were protective of their only grandchild, hassled me for months about taking self-defense or getting a gun.

I gave in and decided to learn self-defense. I lived right down the street from SBG. I figured I’d try it for a few months to make my parents feel better and then quit.

In my consultation with Ryan, I quickly learned that BJJ is a lot like wrestling. It was hands on, physical, and alive in the sense that I had an opponent giving me real resistance.

But that first month I hated it. I was the only female in my class. To make things worse, I wore this giant white gi that made me feel like I was running around in a bathrobe.

I wanted to quit before I even started.

It wasn’t until I joined CAP that that commitment started to pay off.

As someone who did traditional sports, I didn’t think I was going to like Brazilian Jiu Jitsu. I thought martial arts was geeky and nerdy. I thought throwing karate punches and kicking boards was stupid, and it wasn’t going to help if someone attacked me.

Rolling with higher ranked students in my CAP class made me fall in love with Brazilian Jiu Jitsu. My teammates showed me how fluid and elegant BJJ was. They were able to control and manipulate their bodies without smashing me. Because of that I was able to grow.

As I trained at SBG, I watched our coaches, our gym, and our tribe grow. Every year it only gets better and better.

My place in the tribe grew as well, and I found things that I didn’t even know I was looking for.

Like me, they don’t realize that what they’re looking for is community.

SBG brings a rich lineage of martial artists to the Missoula martial arts community. SBG brings something that is not about you. It’s about making the people around you and the world better.

The tribe is filled with people who are seeking something greater, a greater truth, a greater purpose, or leaving the world a better place than when they came into it.

Five years after coming to SBG Montana has a women’s class and a new female purple belt. We have 12 blue belts and countless white belts coming up the ranks.

They’re here to be a part of something bigger than themselves.

They’re here to be part of a tribe.

To learn more about Growing Gorillas, contact us today!

How One Growing Gorilla Got Amazing Benefits & Unexpected Results

Grow your athletes. Grow your business.

Contact the Growing Gorillas team to get started today.